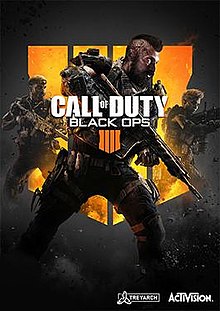 Call of Duty: Black Ops 4 is a multiplayer first-person shooter video game. Unlike previous titles in the Call of Duty series, Black Ops 4 is the first entry to not feature a traditional single-player campaign, and contains only Multiplayer, Zombies and a new battle royale mode called Blackout.[3][4][5]

Black Ops 4‘s multiplayer features the return of Specialists, unique soldier characters with special abilities and traits. The game features a total of ten Specialists, six of which (Ruin, Prophet, Battery, Seraph, Nomad, Firebreak) are returning characters from Black Ops III, while the other four (Recon, Ajax, Torque, Crash) are new additions. It will also feature remakes of five fan-favorite maps, Jungle, Slums, Summit, Firing Range and Nuketown.[6] Treyarch stated that the maps will be available to all players at launch except Nuketown which will arrive in November.

Multiplayer has also been reworked with various changes for more tactical and teamwork gameplay. Automatic health regeneration is removed in favor of a manual healing system (with each player having a health bar), weapons are now given predictive recoil patterns, and a mixed ballistics system, using both hitscan and projectile damage, is employed as opposed to just hitscan. Weapon customization is also emphasized, allowing for deeper personalization of players’ arsenals; attachments are also given tiers, with tier-2 upgrades providing even bigger improvements to the weapons. Certain weapons also offer Operator Mods, which significantly change how a weapon works, while costing a significant portion of the 10 customization slots per class.

In addition, the game includes Specialist Headquarters, a solo mode featuring skill-based tutorials that contain backstories on various Specialists in the game. The missions are set within the same narrative world of the Black Ops campaigns, between the events of Black Ops II and Black Ops III.[7]

Zombies returns as the cooperative multiplayer mode for Black Ops 4. The game mode features a wider range of customization, allowing for more personalized play styles. Mechanics of the game can be customized via “Custom Mutations”, which include over 100 variables, such as overall difficulty, zombie speed, health, damage, and more. Time-limited events known as “Callings” are also promised to be included in the game for long-term engagement. Similar to the Nazi Zombies mode in Call of Duty: WWII, custom loadouts are included to allow players to select different starting weapons, equipment and special upgradable weapons, as well as perk selection to be available in each match. A new game type, Rush, is introduced into Zombies, where the players build up points and multipliers and compete against one another for the highest point possible until death.

Black Ops 4 is also the first game to feature two distinctive, separate storylines for Zombies. At launch, the game features three on-disc maps: “Voyage of Despair”, which takes place on the RMS Titanic;[8] “IX”, which takes place in an Ancient Rome arena;[9] and “Blood of the Dead”, a soft-remake of the Black Ops II map “Mob of the Dead”, taking place once more in Alcatraz Federal Penitentiary.[10] The former two maps form the new “Chaos” storyline, and star a new cast of characters: Scarlett, Stanton, Diego and Bruno; while “Blood of the Dead” returns to the original “Aether” storyline established in the previous Black Ops games, and stars the four original characters (Dempsey, Nikolai, Takeo, Richtofen; also known collectively as Primis).[11] A fourth map, titled “Classified”, is included in the special editions of the game and the “Black Ops Pass” at launch, and is a remake of the Black Ops map “Five”, featuring the original incarnation of Primis (known as Ultimis) as the playable characters.

Black Ops 4 features a battle royale game mode called Blackout which will serve as a stand-in for the campaign mode. While utilizing the traditional Black Ops combat style, the mode includes the largest map featured in a Call of Duty title. Players compete against each other through locations appeared in previous Black Ops games. This mode will also feature land, sea, and air vehicles for players to use. The game mode features various playable characters from the entire Black Ops series, such as Alex Mason from the original game, Raul Menendez from Black Ops II, and the Primis crew from Zombies.[12]

In Blackout, up to 100 players, who can choose to play as Solo, Duos, or Quads (squads of 4), drop into the map via helicopters, and must scavenge for loot to survive as the last person(s) standing, while a circle collapses and narrows the map’s playable area. In addition to regular weapons, players can equip health kits, armors, ammo types, attachments, as well as perk consumables. AI-controlled zombie enemies also spawn at Zombies-themed locations, such as Asylum or Lighthouse, and upon being killed drop Zombies loot items, such as the Ray Gun or Cymbal Monkey. Several vehicles, such as the ATV and helicopter, are also available for traversal around the map.[13]

Similar to Fortnite Battle Royale and the main multiplayer, Blackout features special modes that change the presence or mechanics of physical items in the Blackout world. Modes such as ‘Close Quarters’ emphasise a faster and more aggressive playstyle through the exclusion of long-range weapons, while others like ‘Fast Collapse’ feature a faster narrowing of the circle.